It was almost inevitable.

The most recent and popular example is L’Oréal including Amena Khan aka Pearl Daisy, a hijabi Youtuber, beauty and fashion icon, in this viral advert. Other examples, I’ve named in this previous article.

But in this seemingly positive step forward, one we should surely welcome, lies a question which can’t be ignored.

Mainstream brands know that they can penetrate niche markets much more easily, like the Muslim consumer, by dangling Muslim Influencers, who have huge, loyal followings, in their adverts and campaigns.

But why is it problematic if mainstream brands are using Muslim Influencers purely for monetary gain?

Isn’t the sole purpose of these brands to make money?

If the brands are benefitting with increased revenue and a new market share, while Muslim Influencers are also financially benefitting, opening up other opportunities for Muslim Influencers to walk into, normalising the Muslim presence in a time of rampant Islamophobia through greater representation and diversity and gaining new (hopefully open-minded) non Muslim followers, surely everyone wins?

Entering the mainstream…at what cost?

For me, the question that really counts is: by what means are Muslim Influencers entering the mainstream?

In an interesting and worrying new development, Amena Khan has stepped down from her role at L’Oréal (most likely after pressure from the hair care company) after it emerged that she had written anti-Israeli tweets in 2014, following the Gaza-Israel conflict.

Many have strongly criticised her decision to retract her tweets, claiming that she should have stood her ground for what she believed to be right. Other big Influencers like Dina Tokio have expressed deep concern about L’Oréal’s distancing from Amena, and said that what Amena said wasn’t necessarily wrong. 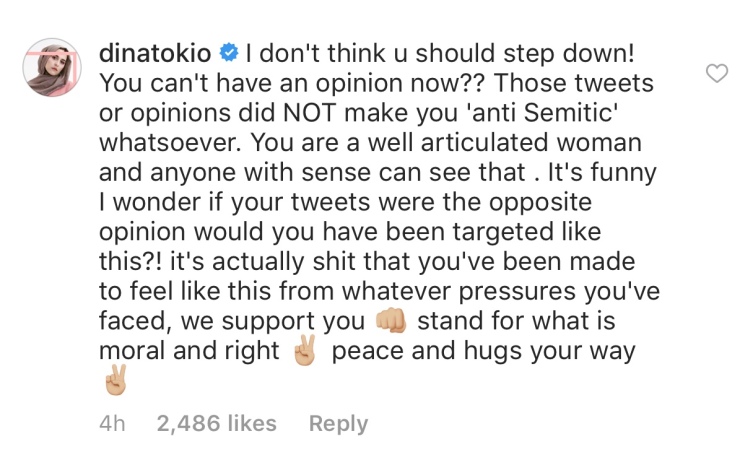 Just days ago she was being widely praised for not giving up her beliefs and values.

Now, she’s being lambasted for selling out on her values.L’Oréal, too, would have gone from hero to zero very quickly in the Muslim scene, the majority of whom are fierce supports of the Palestinian cause.

Ali Official, a UK-based British-Bengali Muslim comedian recently told me that Muslim Influencers must be careful not to ‘cannibalise the very values which they built their followings on’ to enter the mainstream.

Ali is an example of a Muslim Influencer who has turned down huge mainstream opportunities because of the roles and scenes he’s been asked to appear in.

And for me, I applaud him for sticking to his principles.

Canadian-based Muslim comedian, Zaid Ali T is another example of someone sticking to his values, despite opportunities of fame.

What Ali Official has found, however, is that by turning down these opportunities, other, even greater and more suitable opportunities have come his way which don’t undermine his ethical values.

It’s a type of karma.

God’s Universe will open up opportunities that you didn’t think were previously available, for your well-intended past actions.

In fact, we’ve seen it over and over again.

Maher Zain famously left the mainstream music industry, where he was in the same circles as the likes of RedOne and Lady Gaga, to begin practising his faith.

A similar example is Khaled Siddiq.

5 years ago, he was on the verge of signing record deals with mainstream labels, but something didn’t feel right.

He too left his old, irreligious lifestyle, to turn to his faith, and now is enjoying great success with faith-inspired music.

By consistently standing for the same moral values over many years, you can create a strong, loyal following.

Sure, a quick way to enter the mainstream may be to put to a side your values if that makes it easier and more palatable for the mainstream to accept you, but with hard work, time and sticking to your guns, you can make it regardless.

Are you knocking on their door to be let in, or have you worked so hard, that the mainstream is left with no choice but to knock on your door?

One example of a Muslim entering the mainstream under his or her own conditions is this advert of Ibn Ali Miller, an M.I.N Influencer, who was shown praying and wearing Muslim attire.

There is, of course, another way.

Suli Breaks, a poet, who was one of Youtube’s ambassadors in 2016, entered the mainstream as a Muslim, but without flaunting his faith, keeping it a very personal matter.

In fact, until today, many of his fans may not know which faith he follows.

Indeed, you can go mainstream by internally holding strong religious values, but not necessarily always outwardly displaying them through symbols and religious terminology.

Allah, God, The Lord or The Most High, or all one name for the same reality, but by using english words, sometimes you can make something more palatable and non-divisive, which on occasions is needed.

Not only do Muslim Influencers have their foot in the door in the mainstream world, possess massive online followings, but they’re slowly bridging the gap between what their faith demands of them while also fitting comfortably in the new world we find ourselves in. And that’s something exciting.

Faith and mainstream success need not be at odds with each other.