What does the leader of the Labour Party, Jeremy Corbyn have in common with the controversial Islamic scholar, Shaykh Suliman Ghani? They’re two figures among dozens who’ve got behind the NHS-backed organisation Young Planners, a small but growing youth team who, in 2013, launched ‘Muslims Give Blood‘. The campaign encourages Muslims – as you’ve probably already guessed – to give blood. 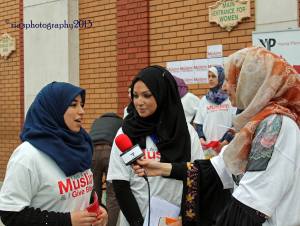 But the campaign is doing so much more – perhaps more than it knows. By encouraging Muslims to give blood, they are getting to the very heart of what it means to be a Muslim, and a deeply grounded, spiritually-aware one at that. Islam, primarily, is about sacrifice, service and giving. Giving and sharing from what you have.

If there is need, our faith commands us to act, swiftly and maturely, until the need is extinguished, especially if it pertains to society. 25% of British people need a blood transfusion at some point in their life. Yet, only 4% of us give blood. To counteract this disparity, Young Planners are encouraging Muslims to give blood. But the beauty of this campaign lies in its universality: when you give blood, you don’t know who will receive it. All you need to know, Young Planners make clear, is that somebody needs it. Perhaps it will go to a turban-wearing, full-bearded, shalwar kameez donning Pakistani mullah. Yet, by the same token, it could also go to a non-Muslim, perhaps someone in a grunge band, a liberal-minded hipster, a Rastafarian or a city banker. We just don’t know.

But the question that arises here is: are Muslims permitted to do this, is it halal? The simple answer is yes, providing giving blood will not harm you or your blood does not go to a fighter of Islam, either physically or financially. You can read more about the conditions here.

This idea of giving your blood to another human is profound. Humans, whether we like to admit it or not, are a species that are fundamentally the same. We’ve always lived in communities because we are designed to work together towards a better society, to come to know each other, not to despise one another, as the Quran eloquently explains. We have a shared human experience and deep human ties that connect us together in ways we cannot really understand. So giving blood is a wonderful gesture that transcends our superficial outward differences and a particularly important one today, in a time when there are tensions, fears and paranoia that exist between various communities.

I’d argue it’s the pinnacle of altruism, too: giving up something of yourself, and giving it away to somebody else in need, not knowing anything about them, except that somebody needs your help.

The 10th – 14th of June is World Blood Week and the 14th is World Blood Donor Day. Give blood to a stranger. By giving blood, you will either save a life or improve the life of at least three people. Sign up here: http://www.muslimsgiveblood.co.uk/