48 hours before my flight, I got a phone call from an elderly, experienced and concerned family friend. “Omar, I’ve heard where you’re going. Is this true? I strongly advise you to rethink your decision,” he said, deeply anxious. “It’s not safe. I would know.”

“I’ve worked on projects in this area and I wouldn’t want you to run into some bad people. There are a lot of them there.” His phone call didn’t help to settle my nerves, which had been rising after three other people in the same week, all unrelated to each other and from different parts of the world, explained that their gut feelings about the trip weren’t positive. Something was trying to stop me from going.

I had, nevertheless, made my intention – and I was going to stick to it. I wasn’t going to allow my gut feeling to be drowned out by theirs. And my feeling was that I must go.

My wife and I landed in Nouakchott, the capital of Mauritania – a largely unknown West African country – early morning on the 1st of December. It was a cool night, neither cold nor humid, and the sky was a dark blue dusted with stars. Birds were tweeting as they woke from their slumber, and within minutes, the adhan (the Muslim call to prayer) flooded the sky. It was a familiar and comforting sound in a country we knew almost nothing about.

We had a few moments to internalize the adventure we were about to take till we were to get picked up by a local Islamic scholar, Shaykh Hamdan ibn Muhammad Salim Adud. He arrived, looking regal in his blue daraa [national dress for Mauritanian men] and kindly took us to his house where we were fed a feast of baked goods, fresh milk and a few rounds of Mauritanian tea. We slept for a while and then he arranged a car for us to head to the village we’d be studying Arabic in for the next three months. We’d heard Mauritanians were famous for their hospitality, and this was our first taste of it. He had organized everything for us, without even knowing who we were. We knew we would be taken care of from this point onwards.

We arrived in Umm al Quraa [Mother of the Villages] later in the afternoon, which was established by the late Shaykh Muhammad Salim Adud (a descendent of the Prophet Muhammad through his grandson Hussain ibn Ali) who passed away in 2009, leaving behind him a remarkable legacy. Umm al Quraa, a place renowned for teaching classical Arabic to students who flock here from around the world, has been labeled a ‘Salafi village’ by some Sufi Muslims and a ‘Sufi village’ by some Salafi extremists. While many of these convoluted terms are often unhelpful and largely problematic, often used to place Muslims into black and white categories, neither, I found, were correct. I saw the Islam practiced here was a normative and pure form of the faith, untainted by nefarious outside influences. It was neither extreme, nor too lenient, carefully safeguarding the ancient, sacred knowledge found in the Islamic tradition, a truly precious thing in a world where true religion is dissipating.

Umm al Quraa is like a time capsule – it’s easy to forget which century you’re in sometimes, as very little resembles modern life. For those that want a glimpse of the conditions the Prophet Muhammad and his companions lived in, you won’t come closer than this. In Mauritania, I met people whose hearts were alive, vigorously beating with faith, which invigorated their limbs, allowing them to wake up early in the mornings to worship and study late into the night with torches to illuminate their books.

Taking a walk before the Maghrib (sunset) prayer

As the sun sets, you see camels elegantly walking one behind each other back to their resting places.

One of the village drivers, Hassan. Taken in the capital city, Nouakchott.

Girls wearing the milhafa [traditional mauritanian dress for women]. A milhafa is about 6 metres of cotton fabric, tied loosely around the body with a few knots.

The sound of the Quran is everywhere: a few hours wouldn’t pass without hearing the young and old reciting the words of God as they walked past my room at all times of day and night. I even saw a young boy tucked away under the shade of a bush one afternoon, deep in the sand dunes, melodiously reading from his pocket-sized Quran.

As you walk up the dunes, with your feet sinking into the warm sand, gazing at the majestic combination of colours in the horizon, you momentarily forget that a world exists outside of the desert. 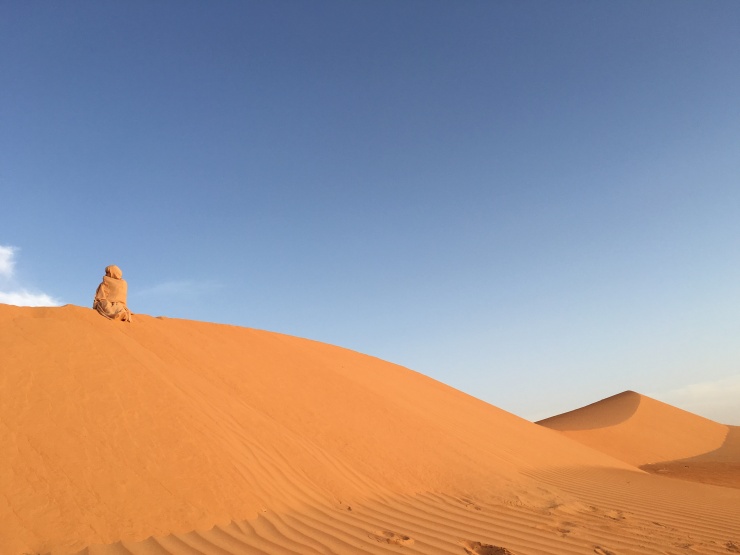 You experience something living in the desert you simply can’t anywhere else. You begin to realise how stress free life can be. That the problems we face are often because we have too much.

The desert has secrets to teach you and, throughout the trip, I heard whispers. You learn that less is more – and you learn what this really means. The more you have, the more you want: it’s human nature. As a result, you actually end up with less, and you become unsatisfied with what you have. But once you realise that a little is enough, you don’t crave more. Indeed, contentment can be found in simplicity and as you strip away all that is unnecessary, you’re left with all that your soul requires.

You learn that happiness is inextricably linked to virtue – and the reason why many of us aren’t happy, is because our societies no longer care much about virtue and the quest for good. The modern world is founded upon the self, individualism and greed.

Here in the desert, though, I found an interesting paradox. People here aren’t filled with themselves, neither do they talk about themselves much, yet, at the same time, everyone who’s here are only here for themselves: to learn, study and get closer to God. So while it’s entirely possible to live a life where you seek good for yourself, in all respects, you can by the very same token, be selfless. One of my teachers, for example, a student from Somalia, said to me: “I’m helping you to learn Arabic, not just because I want you to learn the language, but because learning is a two-way process. You have to teach what you learn, or you will stop learning.”

The outskirts of Umm al Quraa.

You learn that most of us are constantly deluding and deceiving ourselves. Deprived of almost everything that I knew, one thing I couldn’t escape here was myself. In the desert, away from all distractions, prejudices and societal influences, you can’t escape your thoughts, habits and tendencies. At home, we’re often petrified to ask ourselves who we are and what we’ve become, why we’re here and where we are going. We certainly don’t question and analyse our intentions, motives and biases because, if we did, we’d be startled by how much we realise about ourselves. There weren’t any mirrors here but I saw myself more clearly than ever before.

You learn that there’s no need to feel apathetic and pessimistic about the state of the world. Faith commands us to act and continue working towards what’s good, despite life’s difficulties and struggles. It doesn’t matter how gloomy things may seem, we’re not here to create a utopian world. Even if the world was imploding before our very eyes, we shouldn’t stop working, nor should we be frightened – nothing can happen to us if God didn’t Will it. With all of the madness in the world, remain calm, assured and quietly optimistic, because, for the believer, all is in Good Hands.

A week before it was time to leave, a small group of us made a difficult 13 hour journey deep into the desert to visit Shaykh Murabit al Hajj, a 120-year-old man of God who lives high in the mountains.  People say he is one of very few special people left on this earth.

I couldn’t come all the way and not see him.

We arrived in Shaykh al-Hajj’s village, Toimaratt, a quiet, tranquil and self-sustaining village just before sunset on a warm Wednesday evening. We had passed beautiful landscapes of trees, plush greenery, oases and also dark, ruddy, rocky mountains. We were exhausted after such a long journey, but reaching Toimaratt gave us a surge of surprising energy. We were greeted by smiling, friendly faces, shown to our rooms and were soon fed a great feast of dates, camel meat, rice, bread and fresh cow’s milk. We all slept well that night and, despite the difficult journey, strangely woke up without the tiredness we had expected.

Landscapes on the journey to Toimaratt 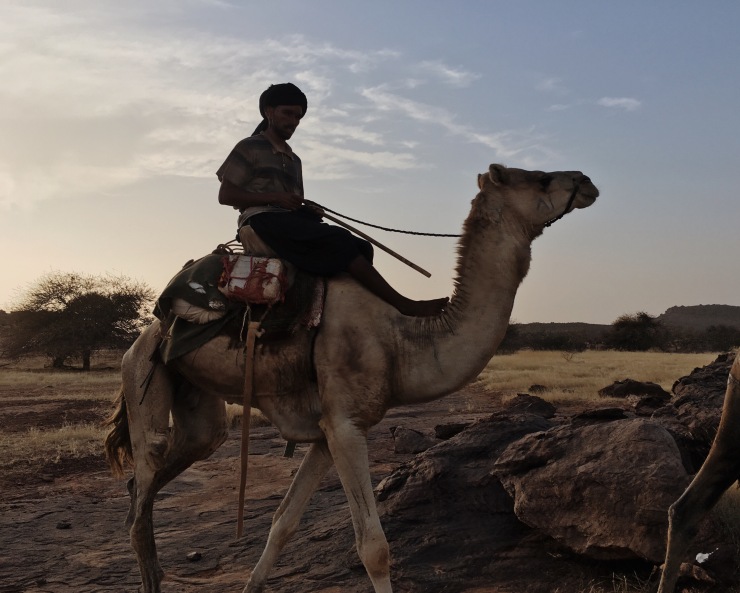 Back to basics: the means of transportation for many Mauritanians

After the dusk prayer the next morning, we were taken to the tent where Shaykh al-Hajj now rests, located right in the centre of the village. As soon as I walked in, I caught a glimpse of him lying on the ground, with a blanket to keep him warm from the crisp morning air. I was hit by a rush of emotion. I felt my eyes beginning to water and a lump form in my throat.

Standing outside the gate of the village of Murabit al Hajj. His tent is directly behind me.

Now very weak and barely conscious, lying down clothed in a blue Daraa, we heard him reciting la illaha illAllah (There is no god but God) in a low, husky voice. He surprisingly wore a crown of soft white hair and had a fairly full beard. Despite being around 120, nothing about his appearence gives away his age – he looks almost 50 years his junior. Doctors who treated him in Nouakchott last year were amazed at discovering his heart’s health was identical to a healthy man of 25.

We knelt down beside al-Hajj and a village elder spoke to him calmly and quietly in his ear, introducing us and asking him to pray for us. He never opened his eyes, but the intonations of his dhikr changed; I could make out ‘Allahumma’ [‘Oh Allah’ – usually the beginning of a personal prayer/du’aa] and I gazed at his face. It was beautiful, tranquil and serene. He then drifted into unconsciousness, and we held his hand.

It was an experience we’ll never forget.

A photo of Murabit al Hajj (left) taken by Peter Sanders in the 1990’s. All credit is his.

The deserts of Mauritania certainly aren’t paradise, there are many things here that can be concerning, whether it’s the scorpions you find in your room, the poverty of some people or the regularity of illnesses, but, without a doubt, it beats modern, city life by a long way.

Many people wonder why someone would want to drift off to Mauritania when we have everything back at home in Britain. Aside from learning Arabic, I left Britain to gain clarity, detach from the toxicity of normal life and to help tame my soul. The inward Jihad against one’s self, as opposed to the ‘Jihad’ we see on our TV screens, needs more attention in our world. 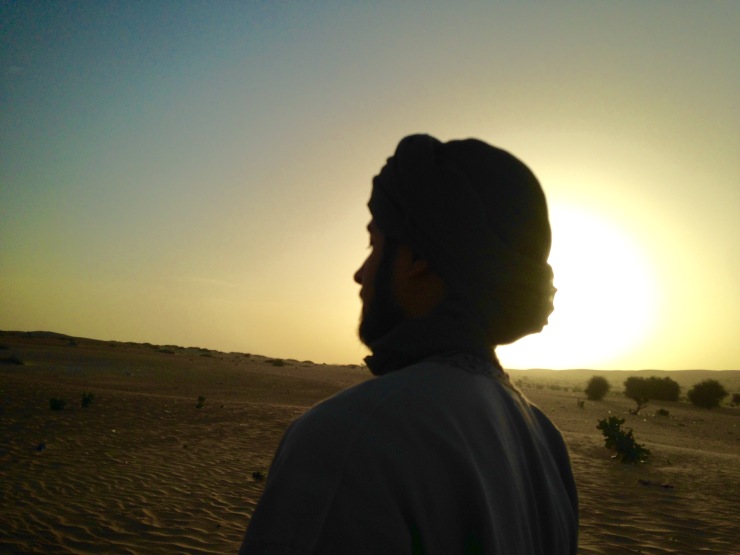 The path to clarity takes struggle

Despite the dryness and often harsh conditions associated with the desert, it somewhat strangely provides succor and comfort. Key to this experience was the realization that if you struggle with yourself, with a sincere and dedicated heart, you can unlock wondrous things. God is never absent, whether you’re in the deserts of Mauritania or in the midst of smoky London.