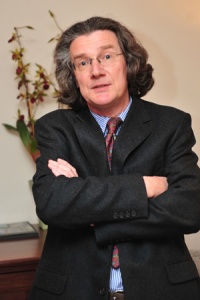 A few years back, I interviewed Roger Hardy, who was a journalist for the BBC for 34 years. During his time at the BBC, he served as the Middle East and Islamic Affairs analyst. In this condensed interview – which doesn’t do justice to his wealth of knowledge on the topic – he speaks about his experiences in the Middle East, the media’s ignorance about Muslims and Islam and the rise of Islamophobia. Following the Paris attacks, I decided to publish some of it.

Your book The Muslim Revolt says in the introduction that we fail to understand Islam. What do you mean by that?

The starting point of the book is my experiences as a BBC journalist. A lot of the book was written out of frustration. Despite everything that has happened since the rise of Khomeini in Iran, till today, there is still a mix of three things when we talk about Islam: fear, ignorance and prejudice.

Whether they are journalists or policy makers, they should know more about Islam but they don’t. They should do because of the multitude of things that have happened over the past thirty years. In theory, they have the means of knowing and the motivation to know because of their work. All I can say is that in my experience levels of knowledge about Islam are pitiful.

Can you give some examples?

My journalist colleagues were a fairly well educated bunch. Usually Guardian reading liberals. They found it difficult to believe when I told them that in the rich Gulf countries that there are more women at universities – and graduating from them – than men. This counters the stereotypes that women are just at home and that these are patriarchal societies where women don’t have any opportunities. I’m not saying women have a great time in these countries but there is a real poverty of basic information.

Different parts of the BBC would often call me up and ask ‘what is Islam’s view on capital punishment’? When I was in a facetious mood I would sometimes reply that’s like asking whether Muslims have blue or green eyes. Their views are as diverse as everyone else. The situation is much more nuanced.

The type of Islam practised by the Taliban or the Wahhabis in Saudi is often taken to be the norm, when they simply aren’t. The media are partly responsible for this. It’s where people get their information from.

I also use to get emails asking why there no churches in the Muslim world. There are plenty of churches. What they mean is: why are there no churches or synagogues in Saudi? So they generalise from one case that all Muslims are doing the same thing or acting in the same way.

How much would you blame the media?

I think the media have a large responsibility and one that journalists, editors and publishers don’t acknowledge very much. You grab the attention of your editor if you find a story of a guy with a big beard saying something extreme. It’s more exciting.

We need more Muslims in the media. Muslims have responsibilities too. The blame should be spread around. There are many issues here. One is leadership. There is a real lack of Muslim politicians in Europe, for example.

Why is there this fascination with Islam in the media?

A sexy story often has violence, sex, religion, money or corruption. When there are stories like a woman from the Eastern Provence who is raped and then finds herself before the dock. That hits so many buttons: sex, Saudi Arabia, violence, Wahhabis. The media is now highly competitive and sensationalist, so there is a lot of dumbing down. The single most significant failure in the media is to contextualise. Are they providing accurate, comprehensive portraits of Muslims who, according to the latest figures, comprise one quarter of humanity?

Across society, Islamophobia has gone mainstream. You get pseudo-academics teaching the American military about Islam. You get people like James Woolsey, former director of the CIA, being a co-author in books like Sharia: The Threat to America. There is a virulent form of Islamophobia which is increasing because of political opportunist. Islamophobia is no longer where it should be, hiding under the rocks with a few loonies where it belongs.