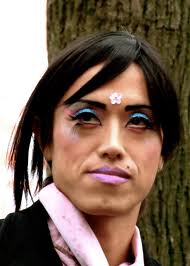 Has equality made man evolve into a species that is unnatural? The division between men and women is becoming blurred.

There is a tendency for more and more men to behave – or naturally behave – in a camp way, these men are often referred to as metrosexuals. Isn’t a metrosexual suppose to be a man who takes pride and care in his appearance? Not anymore. It now means acting and talking in an effeminate way.

But has equality emasculated men? Men no longer know how to act. They seem to be going against their natural behaviour because they feel it is politically correct to act in an effeminate way and have different expectations of a woman’s role.

Why is it that men are tweezing their eyebrows to a point where their face looks pretty rather than handsome? Can’t they tell that they look more feminine than masculine?

Has equality scared men to the point that they feel acting in an effeminate way will make women prefer them? Ultimately, women prefer the alpha-male: someone that will take charge, perhaps be dominant and take control, not a man that doesn’t know how to behave in her company and is indecisive. Men are becoming so sensitive they don’t know how to take jokes anymore, too.

Has equality made men insecure about themselves? Equality has made women stronger and dominant and allowed them to excel in both education and their careers. Men, on other hand, in comparison, have not done as well. Women are increasingly becoming the bread-winner and becoming entrepreneurs in business which use to be a male-dominant trait.

Or maybe it’s nothing to do with equality. Maybe it’s to do with lifestyle and diet. Perhaps it’s all the processed food and fast food, chemical additives and hormones, that are messing with nature. So biologically susceptible men are changing or evolving into species which is a cross breed between a homosexual man outwardly but a heterosexual man inwardly i.e their sexual preference is still for women, although they are flattered by gay men’s attention. Maybe the increase in this cross breed is to do with a chemical imbalance in the brain. For example: the exposure to GM foods, chemicals, preservatives and radio waves, among other things, are all contributions to mutating unborn babies.

GM food, genetic engineering, the medicines pharmaceutical corporations make for us, the hormones pumped into our daily food – especially meat – radiation (from technological devices like mobile phones) can possibly lead to deformities (internally and externally) Are we becoming mutations?

Next article: What has equality done to women

Kim Dacosta is a lawyer, a part-time researcher on food and diet and a gym fanatic.

Disclaimer: The views on this blog post do not necessarily represent the views of Omarshahid.co.uk