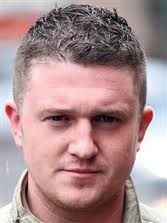 After watching your video that you’ve just posted on Youtube, in which you seem frustrated, fed up and angry, highlighting that you no longer have a life, you keep getting arrested, you have court case after court case, your wife has been arrested, your house has been raided, you’ve done eight days in remand, you’ve served three days in a swiss jail, you believe the Metropolitan police have stitched you up, you have outstanding mortgage payments (which you can’t pay) and your EDL supporters are turning against you – I’d like to ask you a simple question: do you still want to do this?

You mention in your video that you’re “fuc**** fed up”, you also say “you don’t want to be the person doing this”. Your supporters are becoming disgruntled, too.

Let me be clear: I hold no hatred against you, I wish the best for every human being. In life, we all have our personal challenges that we must confront. It’s a shame that you’ve managed to land yourself in this unfortunate position, you clearly don’t want this life anymore, but, as you say, you’re now in it for the rest of your life. But it doesn’t have to be this way.

Not only have you become a victim of hatred by many people because of you far-right rhetoric since you became leader of the EDL. But you became the victim of the far-right media, Islamophobes and the huge tide of Islamophobia following 9/11 and 7/7, which led you into thinking that Islam is a religion worth fighting. It’s not. In this video you admit that you “don’t need to learn about Sharia. I’ve seen all I need to see…from the internet.” Stephen, the internet isn’t always reliable. (I’ve written a short piece about Sharia here, I’d advise you to read it).

Last week’s EDL demonstration at Walthamstow, saw a counter protest by people of all ethnicities, cultures and religions. There were white, black and Asian people all showing that they are united – and Islam isn’t the enemy. The real enemy, they felt, are those who seek to denigrate the harmless practitioners of the Islamic faith.

Stephen, you no longer have to be the enemy of the British public. Quit now, you’ll find plenty of forgiving souls. But as long as you continue to tweet things like: “Kids go 2 fancy dress parties as pirates who were killers,liars & cheats! Will kids in 20yrs go 2 fancy dress parties as Muslims then?” “I went into the Library and asked if they had any books on murder, rape & genocide and the librarian gave me the Koran!!!” “To my muslim followers. 50 percent of you marry your cousins. Give me a rt if your one of those that ended up f****** there cousin.” Tweeting these sort of things are provocative, gratuitous and needless.

You say that you receive death threats, but it’s not surprising that you do, your rhetoric is bound to inflame hatred against you and some people are obviously going to react over-zealously.

Your views about Islam and Muslims aren’t based on anything concrete or factual; yes, there are many Muslims who have abused you, but they are not representative of all British Muslims. Instead, your views have been highly influenced by those whose interests are in distorting the image of Islam and Muslims, namely the media and some high-profile people, who profit of the back of it.

Before you became leader of the EDL, you had a portfolio of houses and a tanning salon. You now have your bank accounts frozen, you’re under financial restraint, you admit that you broke up with your wife before last week’s demo, some EDL members are departing into splinter groups and your party have no funding.

It’s time to stop and realise the reality of the situation. You’ve been fooled, as have countless other people. Open your eyes and your heart.

I don’t know how many people I speak for when I say, if you desist from what you’re doing, stop spewing hatred and apologise for the wrong you’ve done, I will support you from now on. Not only will I do that, but I’ll fight all those who continue to fight against you (the Quran commands people to fight against those who oppress others).

The choice is yours. Life is short. This may be your last chance.

Your brother in humanity,

Read my interview with Daniel Trilling, author of Bloody Nasty People: The rise of the far-right on Live Magazine