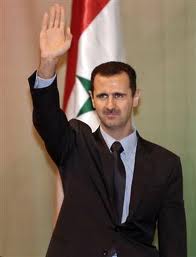 Today has been labelled ‘Great Friday’ expected to be the largest protest to date in a day that could be decisive for Syria. The economist reported in its latest edition that several soldiers have been shot after refusing to fire on unarmed protestors. And here was me thinking: how on earth could these soldiers be so heartless and kill protestors, their fellow brothers and sisters, when they are protesting peacefully? Well, for the soldiers, it seems it’s kill or be killed.

Reportedly 220 protestors have died in Syria since the protests began 5 weeks ago against the dictatorship of Bashar Al Assad. The President lifted the emergency law last week after 48 years, but that is not enough for the Syrian people. The protestors yearn for economic freedom but also want to end of unbounded governmental powers, elite privileges and corruption.

Meanwhile, in Yemen, protests are still going strong to end the rule of Ali Abdullah Saleh who came to power in 1978. On Thursday, Arab leaders from the Gulf Co-operation Council, urged Saleh to quit, but the President remains both stubborn and defiant. Today has been labelled ‘Last Chance Friday’ by anti- government protestors, whereas pro- government protestors have dubbed today ‘Reconciliation Friday.’

For years analysts have been wondering when Yemen will become a failed state. In 1994 there was a civil war, there has been security issues- especially with Al Qaeda, and the country has suffered from extreme poverty; but after so much strife, Saleh has managed to stay in office. For how much longer can he remain unassailable?

America wouldn’t dare get involved in Syria because of the potential ramifications. After all, Syria has the support of Iran and the Lebanese militia party Hezbollah. But Obama’s administration is slowly losing confidence in the Yemini government. Indeed, as soon as Obama comes out publically and calls for the resignation of his puppet in Yemen, he will have to go and will be left in the paralysis of paltriness, just like Hosni Mubarak, Ben Ali et al.