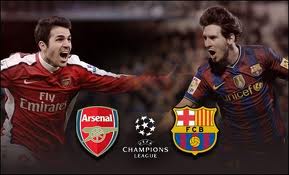 On Tuesday night, football fans from around the world will watch two teams, Arsenal and Barcelona-widely regarded as two of the most elegant football club’s on the planet-battle it out at the Nou Camp. Barcelona were left with a bitter taste in their mouth after giving away a 1-0 lead at the Emirates two weeks ago, but, if last year’s showing which saw the Catalans destroy Arsenal 4-1 is anything to go by, they wont have much to worry about.

Arsenal will be boosted by the announcement that Cesc Fabregas and Jack Wilshere look fit to play, and Robin Van Persie has been included in the squad. Barcelona, however, will contend without the their captain Carlos Puyol, or fellow full back Gerard Pique-both essential at the heart of Barcas defence. Without their two best defenders, Arsenal should look to exploit the Barca defence, as not only will it now be weak and shacky, but will also lack the calming influence of their two experienced defenders.

Despite how much Arsenal fans may dislike Nicklas Bendtner, he may be a worthy choice against a Barcelona defence which could be fragile and lacking organisation. Bendtner may not be the best technically, but his physical presence could be enough to unsettle the Barcelona backline. It is unlikely that RVP will start the game, but this does not mean Arsene Wenger should resort to playing Maroune Chamakh up front with Bendtner. Arsenal need a player who will cause problems. Alas! Andrey Arshavin is the man. Gunner’s fans have also been frustrated with him this season as well, but, he made a difference in the first leg, scoring the winner. The risk could be worth it.

Alex Song will miss the game through injury, but Wilshere and Fabregas, who are both good with the ball, could be Arsenal’s most important players in the game. Fabregas, the captain, will need to control the game and look to play the defence splitting through balls he so often pulls off. Wilshere, who will be just as important, if not more, will have to sit slightly back, and keep the ball moving around the pitch.

Arsenal’s defence will need to be strong, resilient and cannot afford to lose concentration for a split second. Laurent Koscielny put in a good performance in the first leg, and will need to do the same on Tuesday. Johan Djourou will need to use his athletic ability against the likes of Lionel Messi and David Villa who are quick and have great acceleration. And, of course, Wojciech Szczesny, will possibly confront the most difficult time of his career.

Any opportunities Arsenal do have, they will need to capitalise on-failing to do so will lead to none other than a humiliating defeat, as, rest assured, Barca will not miss theirs.

Arsenal’s two biggest problems can be split into two. One is dispossesing the Spanish Champions, they are of course, great passers and movers. The second is, simply, Messi. If Arsenal let him run riot, like they did last season, Arsenal will go back to London in the same way as they did last year.